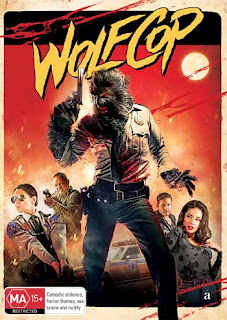 I really didn't expect too much from a movie called "Wolf Cop" it basically looked like "Teen Wolf" but as a cop...…. I have to say I was pleasantly surprised. I have to say this still falls into the B Grade category but it was rather entertaining and the film itself was reasonably well done... It certainly didn't feel like the insult to intelligence that some films can fall into

The film follows the exploits of country town cop/sheriff Lou, who is drinking too much and it's starting to affect his work as an officer. Rumours of an occult group operating in the area and stealking / killing pets  are starting to surface and Lou of course has to investigate. Some strange mysterious occult incident occurs, a local politicial is killed    and Lou starts to grow hair in places he was / wasn't growing hair before and yes you guessed starts taking on wolf like qualities

As is to be expected with Lou's nighttime transformations, the body count starts to rise, and Lou (and the other police) find themselves in the predicament of investigating the killings without realizing it was Lou as a werewolf. Lou comes to the realization he is indeed the wolf and decides to become Wolf Cop and fight crime as a superhumanly strong wolf.

For more great reviews and other stuff be sure to check out http://www.gorenography.com on a regular basis

Email ThisBlogThis!Share to TwitterShare to FacebookShare to Pinterest
Labels: B Grade, horror, werewolves 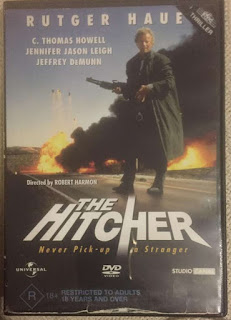 This one was another bought on a punt type deal and I have to say with this one It paid off nicely! Starring Rutger Hauer (Blade runner / Salute of the Jugger / Hobo with a Shotgun) as a sadistic hitch hiker who on a rainy night manages to pick up a ride from a young man Jim. It soon becomes apparent that John (Hauer) is unhinged and start making threats to kill Jim. As the tension increases it is clear the hitcher intends to kill him, but Jim manages to boot him out of the car and flees only to find that John the hitcher is on a murderous rampage and begins to toy with Jim in a deadly game of road "Hide and Seek" for lack of a better word to describe it.

As a stalker Jim is unrelenting and sadistic, he enjoys messing with his victims and this makes for a great watch and the role is played perfectly by Rutger Hauer (… Almost too perfectly some might suspect) The movie is gritty and violent and really keeps you on the edge of your seat waiting to see how it will turn out.

All in all this is a pretty cool film, it would appeal to fans of Mad Max and Wolf Creek but really most action horror fans should be able to dig this one. There is a more than respectable level of gore and violence but this one might fall more into the thriller category... but either way its a great watch and well worth your time!

for more great horror movies be sure to check out http://www.gorenography.com on a regular basis!
at 12:35 No comments: