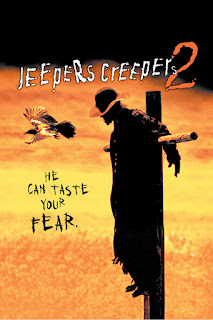 It started off as a fairly standard "teens get stranded in some remote American wasteland"  type thing. I can't say I held many illusions as to how good this one was going to be, but there was nothing on TV so I gave it a shot. Honestly if there were some Simpsons re-runs on, this thing wouldn't have even gotten a chance.

Initially it started as almost a "paint by numbers" horror flick .... Half an hour into it, it didn't improve. The plot revolves around a bus load of teenagers that get stuck on a remote desert highway and some great big winged creature is picking off the teens one by one (I actually thought this was quite original though) then some creepy looking dude starts hanging round the bus and freaking the remaining teens out.  Is he half bat? Is he the winged creature or a scare crow? I couldn't work it out ... nor did I really care that much

I won't spoil the plot (or bore you guys with the details) but lets just  say I'm glad I found this one for only $2....  I still kinda feel that I wasted 2 hours of my life though. The shame about this film is that some of the CGI effects are actually pretty cool, it makes me think someone put some reasonable money into this film.... and equally perplexing it apparently grossed $63 million worldwide....

Judge for yourself ... or better yet don't bother but either way the you tube link is below:

for more great horror movie review and other crap check out http://www.gorenography.com

Well, looks like we've had a bit of an explosion in traffic coming through the site! For this I thank you, there shall be heaps more reviews and cool posts coming up on here soon

We've also  managed to get a facebook page running, so head over there and give it a 'like' if you want to keep up to date or get silly horror-related stuff in your facebook feed! 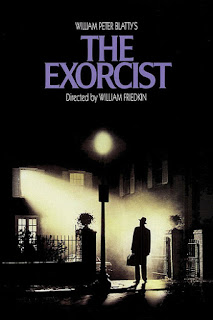 Well.... It's Easter Sunday here in Australia and what better  way to celebrate than with a screening of one of my all time favourate films, The Exorcist?

Obviously a film I hold in such high regard is never going to get a bad review... but seriously this movie is a must see for anyone who considers themselves a fan of the horror genre.

Based on the 1971 novel of the same name, the Exorcist followed quickly to movie theatres in 1973
and of course gained a reputation as one of the most extreme films ever made, and in my opinion is still up there.... I have the extended directors cut of this film so its hard to be sure what was included in the original but this holds up very well on DVD, the image capture and resolution is sharp as ever (as opposed to the Texas Chainsaw Massacre).

It is also important to take into account that the era in which this movie (along with Rosemary's Baby and The Omen) was made, religion was a lot more powerful, spectre like entity that hung over the heads of much of the western world and a movie like this would have struck fear into many a god fearing movie goer and inciting outrage from the church at large. As someone that grew up catholic and with a life long interest in the occult I think its very important movies such as this were made....

The plot follows the unearthing of a occult deity, PAZUZU in Iraq. (Pazuzu is the god of all fevers and plagues in Sumerian mythology) and posesses a young girl, Reagan with obviously horrifying consequences in both the possession itself and the following attempts to exorcise said demon from the young girl.

Not being alive at the time of release of this film its hard for me to say what exactly offended everyone, there is a fair level of horror / violence and coarse language in the film, but I suspect it hits more at the heart of the Christian faith and exposes the ugly side of faith and more importantly the seldom used ritual of the exorcism itself. Whether or not you believe, this film will certainly make you think twice, and that's the mark of a great film.

The movie itself is well acted, well thought out and perfectly executed.... there is really nothing that anyone can fault with this film, all in all one of the greatest horror movies ever made.

In fact, would recommend anyone to go and get the deluxe edition of the movie with as many extra's as possible as its all interesting and provides a valuable insight into the making of such a land mark film. If you have seen this film before, see it again there are many finer points that come out with a second or third viewing as well.


I couldn't find a streaming version of this on youtube but its well worth going out and getting a copy to own or mail ordering it.!

for more great horror movie reviews and other stuff be sure to check out http://www.gorenography.com

Email ThisBlogThis!Share to TwitterShare to FacebookShare to Pinterest
Labels: Horror Classic, The Exorcist

Just thought I'd repost an updated list of the movies I've reviewed up here,  Feel free to go through them, most of them have you tube links so you'll have many hours of gore drenched viewing ahead of you!

As always you can get a more regularly updated list on the "Review" Page along with other articles I've written as well :) 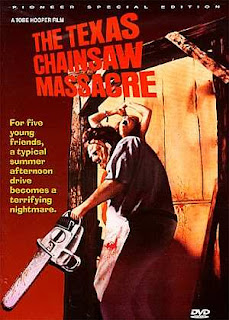 Just got myself a swanky new big screen television so what better way to kick things off which this horror classic?

Upon loading the dvd into my player and starting the film up it becomes apparent how far visual technology has come in the last 40 years, on a hi-res screen this movie does appear much grainier than the films we have now. Originally shot in 1974 by director Tobe Hooper,  this really upped the ante in terms of onscreen violence... despite this it still did very well at the box office, but many cinemas refused to show the film due to the graphic violent content featured.

Don't let that take away from the film though. Once you let your eyes settle into the almost VHS like quality of the movie it seems to fit perfectly. I remember this movie from my childhood as being a landmark in horror when I saw it way back in the late 80's (which was when I started watching horror movies) and it WAS a landmark effort back then almost single handedly establishing the slasher genre in horror.

The film centers in on five teenagers who get stuck in country Texas and find themselves falling victim to a family of demented cannibals, the viewer of course can work out what happens from there without me ruining the plot. This is another immensely watchable film which went on to become one of the classics of the horror genre and a must see for anyone with even a passing interest in horror. One of the main protagonists, the hulking retarded son who wore human skin as a face mask went on to become one of the most iconic horror movie figures in history, Leatherface.

The promo for the film says it was based on a true story.... take that with a grain of salt ... although Leatherface is based some what on the exploits of real life serial killer Ed Gein

In 1986 Tobe Hooper returned to direct a very worthy sequel to the movie The Texas Chainsaw Massacre 2 which of course I have reviewed as well!

Again this was  hard one to find on Youtube, but its very easy to find at any DVD store or order online and as far as I'm concerned it's a must have for any self respecting horror collector anyway

Legendary US thrash metal band, Slayer have come through with the goods again with another horrific (but awesome) video clip to their song you against you. Check it out here:


Its also a prequel to the first clip from the album "Repentless" (with guest appearance by Danny Trejo)  which you can then check out here: 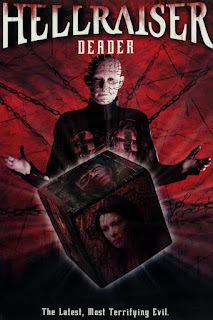 Yet another installment in the long running Hellraiser Franchise. Hellraiser's main character "Pinhead" is  horror icon, and one of the most recognisable characters in the horror genre. I don't know how to feel about this film, it is not a bad watch but still left me feeling very underwhelmed there is so much potential with a a character like this and I feel that the producers of this one are letting us down with a movie that watches  more like TV show than a full feature film. Overall not a bad story line, it just doesn't live up to the potential a character like pinhead has.

Maybe they ran out of ideas? Money? Who knows? Pinhead barely makes an appearance in the film.... Best advice is to see the original films, 1 through to 3 are great but after that the subsequent films got a little to "samey" for my liking most probably not even gaining cinematic release.

I couldn't find a youtube link to the movie   ... but no matter anyway.