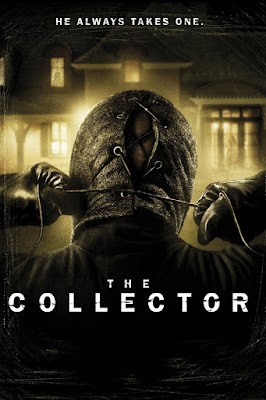 This is one brutal film. Not for the faint of heart of the newcomer to the horror genre.

The plot focus on Arkin who is doing some handyman work at a wealthy family's house. However is wife/girlfriend is in debt to loan sharks and Arkin has to resort to pulling a heist at the house to raise money to pay off the loan sharks and get his missus out of trouble. Whilst breaking into the house he is disturbed by another break-in, a slasher that proceeds to torture and kill everyone he comes across in the house. The 'collector' has laid out a series of insidious traps designed to capture, torture and kill in the most gruesome ways possible. Arkin being the deep down nice guy that he is tries to save the family from falling victim to this deranged sicko but that's about all I can really say without ruining the film.

Here-in lies my main problem with this movie. The bad guy breaks in and seeming instantly there is a serious of traps which have been meticulously laid out and planned to cause as much suffering as possible... where did he get the time to do this? Why does he choose this family? Have they done something to him in the past?

If you as the viewer can suspend disbelief with this aspect of the film long enough to persevere, it's a gritty affair that reminds me of the 'Saw' series of films .... Some inventive killings, tense moments and horrific violence really make this a pretty cool film.... and I think there is some potential for the 'Collector' to become a series (Though I would have to say I wouldn't hold him in the same reverence as Voorhees, Krueger or Leatherface) I hear there is a sequel and this flick was good enough that I'll venture back for a second outing.