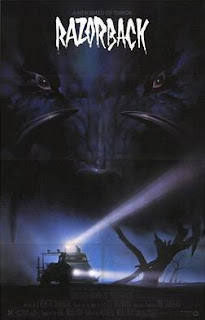 Well this was an interesting find... I inherited a whole bunch of VHS tapes from a friend and while I had throw most of them out there were some gems in there, this one being one of them.

I never managed to catch Razorback before so it was with bated breath that I loaded this one into my 'state of the art' 6 head Hifi VCR and prepared to absorb the movie in all its grainy VHS glory.

Once one's eyes adjust to the analogue / grainy-ness of said tapes, this was a pretty cool watch. It's shot in the Australian outback and I have to say is a fairly entertaining watch. It kind of reminds me of the "Dingo Ate My Baby" case of the 80's revolving around Azaria Chamberlain (not sure if it was loosely based on that story or not) but in this story revolving around a strange mutant breed of pig/boar that is twice the size and killing power of a normal pig that dragged an infant off to be eaten in a grizzly death. The case goes to court and the grandparent that is supposed to have been looking after the child is aquitted, but no-body is sure of the existence of said razorback

a couple of years later an American journalist is on a mission to the Australian outback seeking to create a news story on suspected animal cruelty, carried out by Australian farmers (hunters) and said grandparent who has now become a full time razorback hunter and gets a whole lot more than she bargains for withe the Australian outback folk and the mutant pig..... Over all thats about all I can say about the plot without ruining it, but it does have enough twists and turns to keep it interesting and moving at a steady pace

Overall a pretty cool watch and a great one for those who like Australian Horror, not that we have a lot of it here, but its nice to see the ones that do get produced. Its by no means a master piece but will appeal to fans of the movies Jaws, Cujo, the hills have eyes (for the creepy/rapey Australian outback folk)  etc.... but obviously done on a smaller budget.

I thought it was a decent watch and had a fun watching it, the horror effects are all practical as this was before the time of CGI, not a huge reliance on gore but a gritty watch none the less....... Its also a great chance to check out the Australian outback on film and marvel at Aussie slang and marvel our strange accents and euphamisms

For more horror movie news and reviews be sure to check out http://www.gorenography.comon a regular basis
at 21:51 No comments: 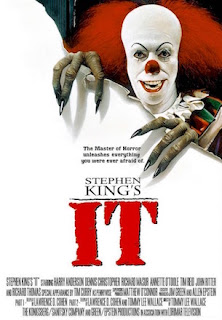 Horror author Stephen King is a mainstay of the horror genre, his work has inspired many fledgling writers, directors, metal bands the world over, and this particular movie, is considered a classic of the genre. I'll be honest and say, I don't think it's a classic, I think its a cool movie, don't get me wrong, its a cool watch, well written and engrossing  but be warned its a hefty watch weighing in at over 3 hours in length, so make sure you have the whole afternoon or night free to watch it. I understand it was originally released on TV as a two night movie special in 1990 which as a TV special would have been really cool, as a stand alone movie I think it does loose a little but that's just my opinion

The plot revolves around a 'loosers club' of kids in in high school whose inner most fears have manifested themselves in the form of a homicidal clown called 'Pennywise' ...  Pennywise the clown represents something much more sinister than just a clown, being more a supernatural being that has played a part in the town of Derry's history over hundreds of years murdering kids. I'm sure this is the start of the 'creepy clown' phenomena, and Tim Curry pulls off the role rather well. The story takes place in two time frames, when the kids are young and again 30 odd years later as they re-unite as middle aged adults to hopefully destroy the malevolent / supernatural clown once and for all.

Plot wise the movie is quite detailed with numerous subplots, with each of the kids lives as both children an adults (way too many to go into here) that keep the viewer interested rather nicely through the film, as a TV film its well developed but obviously that in mind the gore factor is quite low so it does come across a little 'soap opera' ish but over all its pretty cool and I'm glad I finally got around to watching it!

For more great horror movies be shore to check out http://www.gorenography.com 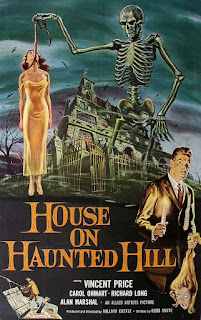 This is a vintage horror film featuring the talents of Vincent Price, who is looking and sounding as debonairre as always. I'm a big fan of this guys work and this one is no exception.

The plot centres in on Price's wealthy, and serial husband character Frederick who is unhappy with his current wife Annabelle his fourth or fifth wife. Annabelle organises the which involves spending a night in a haunted house with 5 other guests for a reward of $10,000 (a lot of money back in the times of black and white cinema) for anyone who survives the night.

Some of the party believe in the supernatural and of course others do not, and its not long before a few bumps in the night and macabre goings on have everyone scared for their life and wanting get out.

The dialogue is excellent and the story is extremely well written and engrossing through out the whole story. This movie has a certain old world charm about it that cannot seem to be recreated in this day and age... The gore factor is non-existent but this means the story has to rely on dialogue and plot development the whole way through, and it does very well thank you very much! The movie has a genuinely creepy atmosphere about it, and the sound effects compliment the film perfectly keeping the viewer rivetted. This is not going to scare hardened gore-fiends but is a very entertaining and compelling watch.

Plot wise there are a few twists and developments that are expertly written into the story development and everything in my opinion works rather well. I won't ruin them here but rest assurred it will keep you guessing~

Of course its up on Youtube so check it out here! You won't be dissapointed!

THE TEXAS CHAINSAW MASSACRE - the next generation (1994) 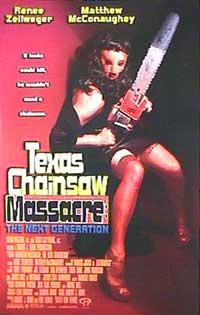 Well, this is an interesting film..... I'm not sure on the continuity of this one, and how it relates to part 1 and 2, is it a reboot or a sequel or what.... remains a little unclear..... but I have to say over all it was a reasonably  solid and engrossing affair.... I won't go as far as to say it is as good as either part 1 or part 2 (both of which I enjoyed immensely) but yeah, it was a pretty decent watch and I really can't complain too much. Although the potential was there to make it a lot better!

The opening spiel at the start of the movie stated it was in fact, a continuation of the story, but I'm not buying it, it felt more like a retelling of the first story, but without the high impact violence and gore. It did feel a little like a watered down version of events or maybe retold to be more relevant to the current day viewers of the time (mid 90's) to appeal to a wider market. Whatever the reason it was still a pretty good watch, and then young up and coming stars Renee Zellweger and Matthew McConaughey did really good work in their respective roles, which is probably what brought the film into the realms of decentness, rather than being stuck in B Grade limbo.

Basically the story revolves around a bunch of teenagers who after their prom get lost in the back-woods of texas and fall prey to a family of perverted and mentally deficient rednecks (much the same as the first film) it lacks the punch of the first classic film and while some interesting new takes on the story are present, the box office reaction to this film, basically backs up what I'm saying, it was quite OK but nothing special. Regardless you can basically guess the story from there, so there's no real point in me discussing it any further.

Don't bust a gut or pay big money to see this film but if like me you like haunting the second hand markets and find it going cheap, its a worthy watch...  it just falls short of the first two films which is kind of a shame really. I do believe director Henkel actually did work on the first film of the series as well as Tobe Hooper... which lends it some authenticity but it is really a tale of squandered pontential.

For more great horror flicks be sure to check out http://www.gorenography.com
at 02:48 No comments: