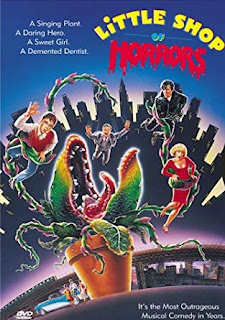 This is the 80's version starring Rick Moranis, I recently went back and watched the original from the 50's and while it wasn't particularly worse than other movies from the era, it left me rather underwhelmed.
This one however is a different story... its vibrant, funny and interesting... and a musical. Its hardly a gore-fest but I do have to say its a great watch and a heap of fun. The music is firmly "rooted" (excuse the pun) in 50's rock n roll but suits the vibe of the film perfectly.

The film if you don't know revolves around a failing flower/plant shop that's just about to go out of business when flower shop worker, Seymour (Moranis) finds a rare breed of flower that starts attracting customers into the shop. Only problem is that it feeds on... wait for it... BLOOD! As the town gets word of the strange flower the traffic to the shop grows, and so does the plants appetite.

There's a bit more to the plot that that but really it doesn't matter, this is just good simple musical fun. Switch off the brain and enjoy the film and the tunes!

For more great movies and horror reviews be sure to check out http://www.gorenography.com 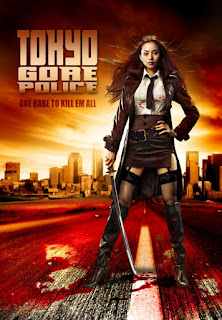 Hmmm this one was an interesting one for me...... Initally this review was one of the first reviews I did on this site, and as with a few of them I've decided to revisit the films and these reviews with the benefit of a second viewing. I am not at all familiar with much of anything from the world of Asian horror so I found this one really hard to follow intially. (It probably didn't help that I'd had a few drinks) but with the benefit of a re-watch this film made a lot more sense. I'm still going to say the story was a little disjointed and the cinematic style is much different to what we'd expect in western cinema... much more vibrant and contrasting colours than what we'd be used to seeing and some truely disturbing visual creations. The violence/gore is waaayyyy exaggurated, and quite sexualised, which may turn some off or others on depending on what your bent is.... This is some extreme stuff depicted in this film, I would not recommend it to young people or anyone new to the world of horror movies.

Basically it follows main protagonist Ruka, who is a cop in the not too distant but much more grim version of Japan. Ruka Is an elite cop following in the footsteps of her her father and is looking to avenge his violent death. She hunts down bio mechanically enhanced mutant criminals called 'engineers'. This of course makes for some excellent gore opportunities! The colours, abstract shooting style and excessive violence confused / distracted me a little, which is why I'm sure I missed a lot of the finer points of this film the first time round. . Lots of WTF moments appear throughout the course of the film ... and even whilst at times not entirely knowing whats going on,  the film is a great visual voyage of abstract but very artistic horror, but the initial confusion does lend itself to a second viewing.

Maybe this film was just an excuse to cram as much bloodshed and violence into a film as possible and show off the visual creations of director Nishumura's (as it was his first film) and the plot is really just secondary to this? Either way its good squeamish fun!

For more great horror movie be sure to check out http://www.gorenography.com on a regular basis! 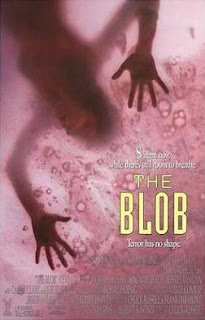 Well, this was a nice bit of fun! This is the remake of the 1950's blob... I haven't seen that one yet so I can't comment on the age old question of  "Is it better than the original?" but this one was a great watch, the plot is fairly simple but the action keeps it moving along nicely!

Basically the plot revolves around a foreign object (spacecraft of some kind) that falls to earth and some sort of gelatinous ooze (the Blob) escapes and starts feeding on humans that are unfortunate enough to come across its path. The blob is translucent and feeds by acidicly dissolving and consuming whatever it attaches itself to which of course makes for some great horror effects. One by one it feeds on its prey until the whole town is cordoned off by biohazard troops, and it's up to a couple of teenagers to stop it from consuming the whole town.

Like I said fairly simple fun and it stars a very young Shawnee Smith who later went on to star in the SAW films (and Becker, Anger Management etc..) as one of the teenagers. The acting and production is quite ok, but there horror effects are pretty cool, and hold up well to this day. The fashion senses are of a distinctly 80's groove so there's plenty of mullets and hi top sneakers to keep us all amused at that glorious era of horror and fashion. While there is a little gore in this one its nothing too serious and people that may not be into horror should be able to enjoy this as well as your younger, more impressionable horror fans

For more great horror movie reviews be sure to check out http://www.gorenography.com on a regular basis!
at 22:12 No comments: 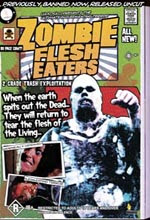 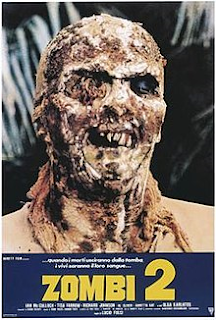 Firstly just to clarify a few things... My copy of this release goes under the name "Zombie Flesh Eaters" but I've more commonly heard it referred to as "Zombi 2" … George Romero's second installment of his "Dead" series, Dawn of the Dead from 1978 was titled "Zombi" in some parts of Europe. The only sensible thing to do was now to cash in on the success of "Zombi" and release another flick while the iron was still hot, and of course set it up as an unofficial sequel... and thus we have Lucio Fulci's "Zombi 2". I find this practice annoying and I'd much rather refer to it as "Zombie Flesh Eaters" (just to make it worse it has a few more variations of those names as release titles too)

The movie itself is actually pretty good and quite enjoyable... it has that distinct Italian style about it, very gritty and the gore is quite full on for its time as well... Earning it a spot in the "VIDEO NASTIES" list and getting banned in some places. Compared to some of the movies on that list, this is not the most extreme by any stretch infact id say there's only one scene (where a zombie drags a womans head into shattered glass and pierces her eye/eyesocket) as the only really extremity in the film while the rest of it is fairly standard zombie, munching, maggot riddled goodness these Italian flicks are known for.

The plot revolves around a missing scientist who is researching ancient voodoo magick on an island off the carribean which has fallen under attack by zombies... these undead nod a little to the older Haitian zombie legends rather than purely following the lead of the Romero type zombies but they're basically the same.  The film itself starts when a ship leaves the island and is discovered by coast guard when the occupants have been killed and  zombie who is still on board bites and infects a coast guard and investigations lead back tot he island.

Its gritty, well shot and has some levels of nudity in it but one scene in particular which I thought was really well done where a zombie attacks a shark I thought was rather well done! Especially for the vintage of this this film.

Overall I quite liked it, it didn't require too much thinking but it flowed well and was quite entertaining...…..  Id recommend any zombie to get a hold of this if they can find it. 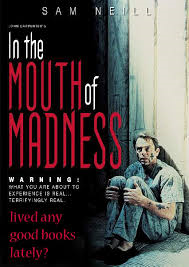 Yet another HP Lovecraft adaptation set to film. With legendary director John Carpenter directing you know this one is going to be quality. As expected the quality of the movie is amazing and immaculately shot, but maybe I am biased as I really do love John Carpenters work. Sam Neill as the main character does a stellar job, and while I haven't read any HP Lovecraft in many years from what I do remember of this story it tends to follow the original story quite well.

The story itself opens with main character John Trent (Sam Neill) committed to a lunatic asylum, and then the rest of the movie details John Trents descent from hot shot insurance fraud investigator, to taking on a case to find the whereabouts of acclaimed horror writer Sutter Cain, and insure the release of his next major chartbuster "In the Mouth of Madness". Cain is big business in the world of horror and his disappearance is also the subject of the a major insurance claim. In the process of undertaking the investigation Trent reads Cain's mind bending novels an sets off to find a town, Hobb's End which is referred to in Cain's books in the hopes of finding him. Unfortunately for Trent he finds himself getting a little too involved in Cain's writing and it begins to affect him mentally as lines between fiction and reality start to blur. I won't go any further into the plot than that but rest assured its a plot full of great twists and keeps the magical world that HP Lovecraft created alive and vibrant in movie form.

The is quite a few cool horror effects in this movie, but the movie itself  is more of a cerebal experience than flat out gore, meaning you do have to pay reasonable attention to what's going on (as opposed to other Lovecraft adaptations like Re-animator) but its a very rewarding experience which all I can do is recommend you check it out for yourselves!

For more great horror movie reviews and other stuff be sure to check out http://www.gorenography.com on a regular basis!
at 18:43 No comments: 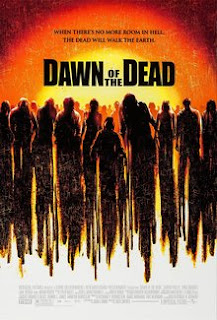 In all honesty this remake is pretty good, production values are great and the violence and gore is top notch. It just misses something. It follows a fairly similar story line and progression to the original "Dawn of the Dead" but something about the souped up special effects leaves me feeling like I miss the "Good old Days" so to speak.

The plot itself follows a few small groups of people who after the zombie apocalypse have holed up in a shopping mall in an effort to survive. Obviously with the situation unfolding around them the tensions mount and relationships between the parties are strained... one by one they are picked of by the hordes of zombies surrounding and breaking into the mall to feast on the survivors. There are slight plot differences, enough to keep it interesting and updated for current fans but no major departures from the original story line.

One thing that really annoyed me about this film was the fast moving zombies, to me zombies are supposed to be slow, sluggish and brain dead, where as these zombies run around like Olympic sprinters and seem to be able to master more complex operations than the zombies featured in the original film.

That aside, I really don't have any problems with anything else the film has done and in a way its probably a necessary evil as I'm sure it exposed a whole new generation of scare fans to the work of George Romero.

For more great movie reviews be sure to check out http://www.gorenography.com on a regular basis!