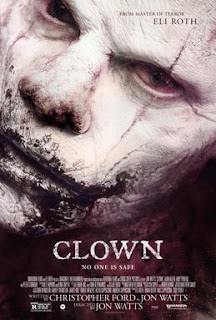 I hadn't heard anything about this film but bought it on a pure punt. Upon settling in for the night and loading this one up in the DVD player I noticed it was directed by Eli Roth ... from the start you could tell this was going to be a great ride.


The plot centres in on a family who are holding a birthday party for their son (who appears to be about 6-8 years old) and the clown they hired doesn't show up. By some bizzare co-incidence the father, A real estate agent named Kent, finds a clown suit in a house he has up for sale and decides to fill in for the clown. Kent does an awesome job (considering he's never been a clown before) and the party is a hit with the kids......... only problem is he can't get the clown suit off.

Kent can feel himself starting to change and does some research on the suit and tracks down its former owner who informs him it was worn by an old demon the "Cloyne" ... from which the idea of a clown is supposed to have originated. Kent can feel the hunger inside of him growing into bloodlust he cannot control and starts to crave the flesh of children as per the old owner of the suit

That's about as far as I'll go with the plot for fear of ruining it but as with anything Eli Roth is involved in its a gripping and entertaining ride, and the horror is realistically grim. Roth takes what is a supernatural theme and makes it quite believeable for the duration of the film which I think is the hallmark of a master of the genre

I thought it was  a great film and would fully recommend it to anyone ,,, except those who have a fear of clowns, it could traumatise them for life! 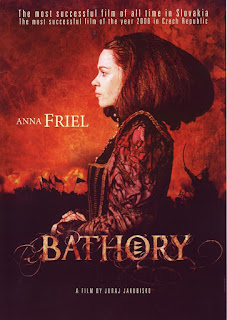 This is one film I had been looking for, for a while now and I was glad to finally get my hands on it... This film follows the life and trials of Elizabeth Bathory the fabled countess of Hungary, who reportedly bathed in the blood of virgins to preserve her body against the ravages of age. This film does take a different take on the popularly accepted version of events, and portrays a much more human take on the countess.

I have to commend the makers of the film for delivering what is an absolutely magnificent film, immaculately costumed and shot and authentic sounding dialogue... The attention to detail is just awe inspiring. I can't help wondering if this film cost half the GDP of Hungary ($15 million USD I later found out to be the most expensive Hungarian piece of cinema ever produced but in alliance with the UK / Slovakia / Czech Republic I should add) , but either way they've done an amazing job of bringing the movie to life

The movie itself sits somewhere between a drama, period piece and with a fair sprinkling of violence and blood it will appeal to horror fans as well, but I think this is definitely one film that has a universal appeal... Featuring no actors I'd ever heard of before, there is nothing to distract from the realism of the film. Anna Friel as the Countess is perfectly cast and beautiful to watch, and really gives the countess a life and sexyness and vunerability  that I'd never associated with the character she plays so perfectly

The film itself is a hefty affair and goes for well over 2 hours and spans the entire adult life of the countess in fair detail, from a young countess to an older countess who appears to be physically untouched by the ravages of inevitable ageing. Its a great watch and though some might consider it overkill to some degree it is quite engrossing the whole way through... For my money it had a vibe similar to that of the English Hammer films (like Witchfinder General) or even the Francis Ford Copolla version of Bram Stokers Dracula.