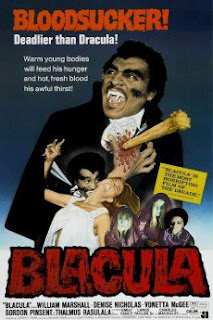 I didn't go into this one with any great expectations as I'd read about the film being a "blacksploitation" peice of B grade crap........ But I have to say I was pleasantly surprised, not to say that it's a classic, because it definitely isn't, but it is a rather watchable movie and in my humble opinion is worth the time taken to watch it.

The plot focuses in on Mumawale (spelling?) an African prince who travels into Europe with his wife to meet up with Count Dracula to try and convince him to stop the slave trade he his involved in. Dracula does not see any reason to give up his slaves or pay them and the meeting degenerates into a brawl and the Count subsequently turns Mumawale into a vampire while his wife is imprisoned and eventually dies, while Mumawale spends the next 200 years in an undead slumber.

As fate would have it the coffin that housed Mumwale's body is purchased by a couple of american antique hunters and shipped to america (well the 1970's America) where he awakens to find new victims, and persues a young lady who he believes is the re-incarnation of his dead wife from 200 years ago.

Like I said the movie is quite watchable with a low level of horror so pretty much anyone can watch it.... and some very funky 70's style wardrobe which do add to the eye-candy aspect of the film and special attention must be given to the great facial hair that Mumawale grows when the blood lust takes him..... I dare say Samuel Jackson took a leaf out of his book in "Pulp Fiction".

For more great movies and reviews be sure to check out http://www.gorenography.com

Email ThisBlogThis!Share to TwitterShare to FacebookShare to Pinterest
Labels: 1970s, B Grade