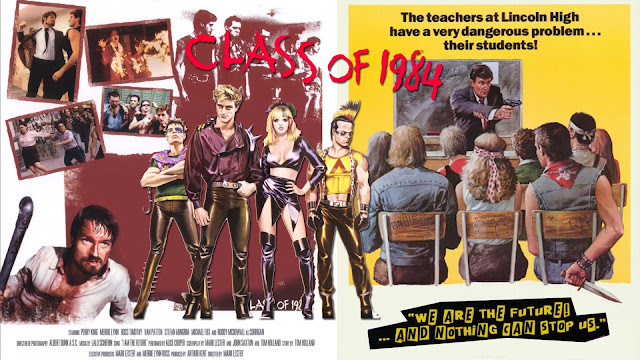 Ok, this isn't strictly a horror movie as it probably falls in the "film noir" category, but in many ways it is rather horrifying that a school or even society in general can get to a point as depicted in this movie. Whilst it probably seemed a far off or bleak view of the future of education when it was made back in 1982, the sad thing is that it doesn't seem all that far out of the bounds of reality these days.

The film revolves around Andy a young teacher who gets transferred to a new school... where gang violence and drug dealing is rife. At the centre of said violence and mayhem is gang leader "Stegman", a brilliant but perverted and down right evil kid who has the cornered the drug dealing market and has whole school trembling in fear of him and the law too afraid to do anything to a minor. The guy who plays Stegman (Timothy Van Patten) does a brilliant job of bringing the character to life,  the viewer feels nothing but contempt for him and horror in the way that he manipulates a system designed to help and protect high school students. Also notable for one of the first appreance by a very young Michael J Fox who plays the role of one of the kids that get victimised by the gang

Teacher Andy tries his best to sort out the school but instead the school descends into horrific violence and even a student death. Then it ramps up a notch or two as the gang target Andy for sticking his nose into their business. This is quite a violent and dark film with some decent gore when the shit hits the fan towards the end. If you liked films like "Clockwork Orange" or even "Soylent Green"

Not sure how this one went at the box office, as I'm sure it was refused screening in many countries as there is some high impact violence but I wouldn't say its as full on as "A Clockwork Orange" it is however a pretty cool watch and definitely worth any horror movie fan's time to watch!  As an added bonus it has a song by shock rocker Alice Cooper as a major part of the films soundtrack! very cool!

for more great movies and reviews feel free to check out http://www.gorenography.com