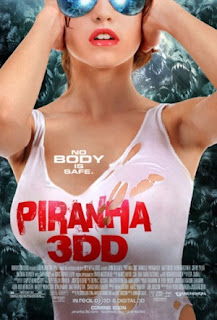 Lets get one thing out of the way first, this is strictly a B grade schlocky no brainer of a movie, it's not a stinker.... but it ain't no thinker either!  If you can get past that and killer fish, and giant titties are your thing ... then you're in for a treat!

Basically the plot revolves around some guy who re-opens a shut down water park that had previously fallen victim to a piranha attack. Of course the fish come back and start devouring the patrons of the park. Simple enough plot, simple enough that you can drink beer with your friends get sidetracked on a conversation and duck back into the movie like nothing happened at all without missing any key plot details its that simple.

The fish look awesome and the action and gore is really good. As simple as the plot is, its actually quite entertaining and lots of blood and guts and smaller guest appearance roles from Christopher Lloyd (Back to the Future) reprising his role as a crazy science type dude, and the Hoff (Baywatch) as a Celebrity lifeguard (who can't save anyone for shit) and a host of beautiful women who have no problems whatsoever in showing off their bountiful breasts at every given opportunity the lightweight plot allows for, actually make for a decent watch.

If you're too tired from work, or too hungover to think, or just need some background noise and visuals this is the movie for you. A guilty pleasure for the brain dead horror fan in all of us. I was surprised I liked it as much as I did, but really there's not much point dwelling into it much deeper than this because that's really all their is to this movie.

For more great horror movie reviews check out http://www.gorenography.com on a regular basis!.

Email ThisBlogThis!Share to TwitterShare to FacebookShare to Pinterest
Labels: B Grade, horror