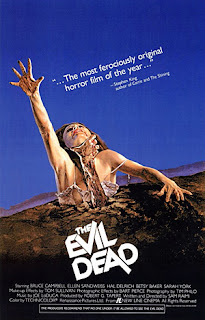 One of the all time greatest horror movies, I cannot say enough good things about this movie. Directed by Sam Raimi (who has directed a lot of movies and TV in his time after this... including Spiderman, the Hercules TV show in the 90's and most recently Ash vs the Evil Dead amongst many others) and starring Bruce Campbell as Ash the hero of the film..... This is almost the perfect horror movie and definitely falls within my top 10 horror movies of all time.

The movie plot revolves around the plight of a group of young adults (maybe early to mid 20's) who go on a camping weekend away and stumble across an old tape recorder which contains recordings of ancient incantations recited from the fabled "NECRONOMICON" the book of the dead from Sumerian mythology. Upon playing the reel to reel tape player the incantations stir something sinister in the forest surrounding the cabin in which the group are staying in. The said evil that is stirred causes its victims to become possessed by an ancient evil which seeks to destroy the group and turn them to its dark ways

I've seen this movie many times in the past and it never fails to entertain me, as some who've been paying close attention to this blog might know I'm really into the Necronomicon and anything to do with it will pique my interest. This film whilst taking some liberties in regards to the original text ......... was probably the most apt description of the evil that the book describes and was a landmark in terms of gore and special effects for its time. I've seen some describe the movie as a black comedy,,, in my opinion, its not  a comedy.... BUT there are some filming techniques and gore effects which may make it seem a little 'hammy' but I consider it a serious horror film and a right royal gore-fest at that!

The Camera angles are superb, the filming techniques were amazing for the time and the gore stepped it up a level from all films of the time , especially considering the movie was done on a rather small budget (as Sam Raimi was unknown at the time) and with the exception of the Italian gore flicks of the late 70's/early 80's the movie really stepped up the gore level within the horror genre at the time...  the "Tree Rape" scene set about a huge motion of controversy and from what I understand gained the film an "X" rating (tho i can't confirm this) in some countries.

Really all I can do is recommend that you MUST see this film........