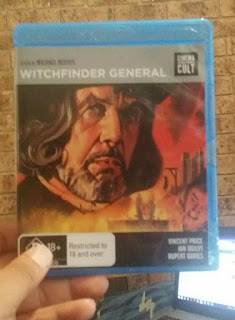 I'd been searching for this one for a while now, and didn't realise it starred the one and only Vincent Price, whose movies I've become a little obsessed by of late.

The film itself revolves around Matthew Hopkins the "witchfinder" who wanders around 17th Century England doing Gods work, seeking out those who've been suspected of witchcraft and extracting confessions out of them and putting them to death or just killing them regardless. From what I've read about the witch burnings of the time (which isn't a huge amount) it seems to follow the historical accounts reasonably closely and the costuming and dialogue really add an air of authenticity to the proceedings.

Vincent Prices performance is of course legendary and chilling as per usual, and the film is lavishly shot, I love these old style films shot on film which i think have a more life like texture than many of the digitally shot films of today. The disc copy I got is of course a modern reprint, and it shows an "R" rating, while it may have been on the more extreme end of horror for the time, it was rather tame by today's standards and would have barely qualified for a "M (15)" rating .... which I guess isn't really important as the film holds up brilliantly either way, but it did kind of get me really excited for a gore-fest, which it certainly isn't.. while the violence contained in the flim does look convincing the blood looks like bright red paint and comes across as fake, which to be fair most films of the time up until the mid 70's tended to do.

For more great reviews be sure to check out http://www.gorenography.com
at 16:27